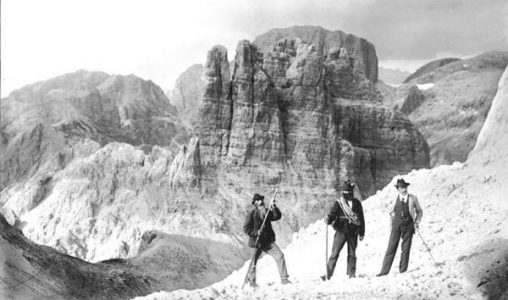 1864 THE CONQUEST OF BRENTA DOLOMITES

Within a summer, four groups of English and German “lords” arrived in Molveno with the aim of crossing the Brenta Dolomites. From that date more and more climbers: English, Germans and Italians began to explore the mountains around Molveno. In 1865 John Ball reached as second Cima Tosa. During these years mountaineers such as Freshfield, Tuckett, Ball and many others arrived.

The fire in Molveno began around 3 pm on Monday 5 September, destroyed and transformed the town of Molveno for the second time after the 1791 blaze. The journalist who went there on 6 September wrote: The fire developed so quickly that the person who first noticed it, while preparing to leave the porch to raise the alarm, was almost overwhelmed by flames. Molveno was a mass of grouped houses, piled one upon the other, with narrow streets so that the roofs of the houses at certain points touched each other. In less than half an hour all the roofs of the central houses blazed with flames, collapsing with a sinister roar and raising clouds of
dense fumes and trails of sparks which in turn carried the fire further and further away. The number of the destroyed houses was about sixty, over 100 families out of 150 lost their roofs, furnishings and, what is worse, all the forages piled up with much effort in the barns were lost. The calculation of the damages was estimated at 3 million lire and the insurances did not give more than 200 thousand lire.

THE BELLE EPOQUE OF TOURISM IN MOLVENO

At the beginning of the twentieth century a new phase began for tourism in Molveno. New structures were built that boosted economic development, but a change in mentality also occurred. A population of farmers changed into mountain guides, hoteliers, waiters, cooks and shopkeepers. The presence of two figures capable of anticipating the times was decisive: the passionate mountaineer Osvaldo Orsi and the innovator of tourism and hospitality Attilio Bettega. At the end of the nineteenth century Molveno was the main starting point for mountaineers who wanted to venture towards the Brenta peaks through the Val delle Seghe. Personalities like King Umberto I of Belgium and his son Leopold III with Queen Astrid came in Molveno. Guests arrived from all over Europe: from London, Wien, Prague and Brussels. The Vienna Opera House stayed at the Grand Hotel. Umberto Nobile in 1926, Guglielmo Marconi in 1930, English Prime Minister Chamberlain in 1931 were other illustrious visitors. The cyclist Learco Guerra in1935. In these years other historic hotels opened and the first bathhouse was built on the banks of Lake Molveno. 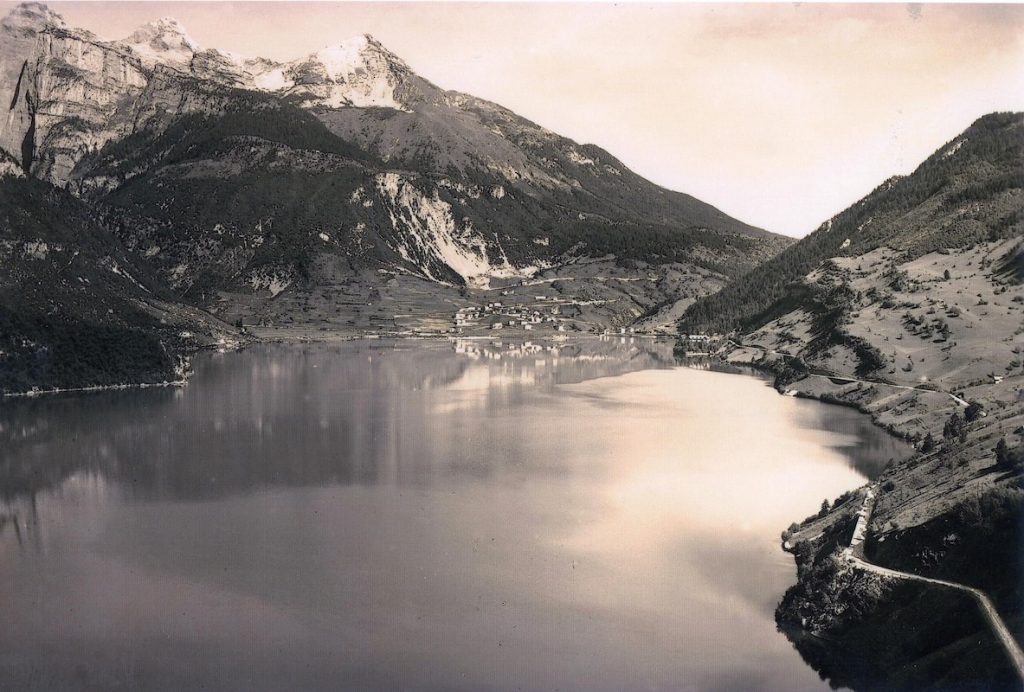 In the overall economic resources available to the locality of Molveno, the exploitation of forest and timber certainly emerges. Unlike the production of agricultural products, this had a commercial response to the Po-Veneto area. In this context the case of Molveno is to be placed, where, after 1590, the first sawmill was built. It is significant that this sawmill was built by a Venetian, Don Antonio
Tajalacqua, who arrived in Molveno as a curate. There were five Molveno sawmills: Sega Tajalacqua, Sega Donina, Sega Massenza, Sega Meneghina and Sega Giandrona. However, the exploitation of forest resources was not the only source of livelihood for the population before the arrival of tourism. A large part of the population was, in fact, employed in other activities, linked to the world of livestock and agriculture, activities that alone were not sufficient to guarantee sustenance. In the Molveno district there were two dairy houses for mountain pasture with the possibility of making on-site cheese production.

HYDROELECTRIC EXPLOITATION OF THE LAKE

In 1914 the idea of a large-scale exploitation of the Sarca basin was born. Among the numerous projects, the one proposed by the engineer Stolcis, who in 1925 had developed the derivation of the upper course of the Sarca in Lake Molveno, was chosen. Despite the enormity of the work, this design solution immediately proved to be the most effective for achieving the set objectives and also the most advantageous, both from an economic point of view and from that of the full exploitation of the concerned water resources. The works in Molveno lasted more than five years from 1948 to 1953, and more than 8000 workers were working simultaneously, requiring a very high human cost: almost 50 were the deaths related to the construction of the entire water derivation system. At the end of the works, a 25.2 km tunnel had been created, it crossed the Brenta Dolomites and arrived in Lake Molveno. A tunnel of about 5 km was created across the Mount Gazza to bring the water from the Molveno basin to the Santa Massenza power station, and at the end of the tunnel two 85% forced pipes were planned, with a jump of 487 m. The emptying of Lake Molveno had brought to light the remains of a submerged forest which, with the dating of radiocarbon, allowed the birth of the Molveno natural basin to be relocated to around 1000 BC. 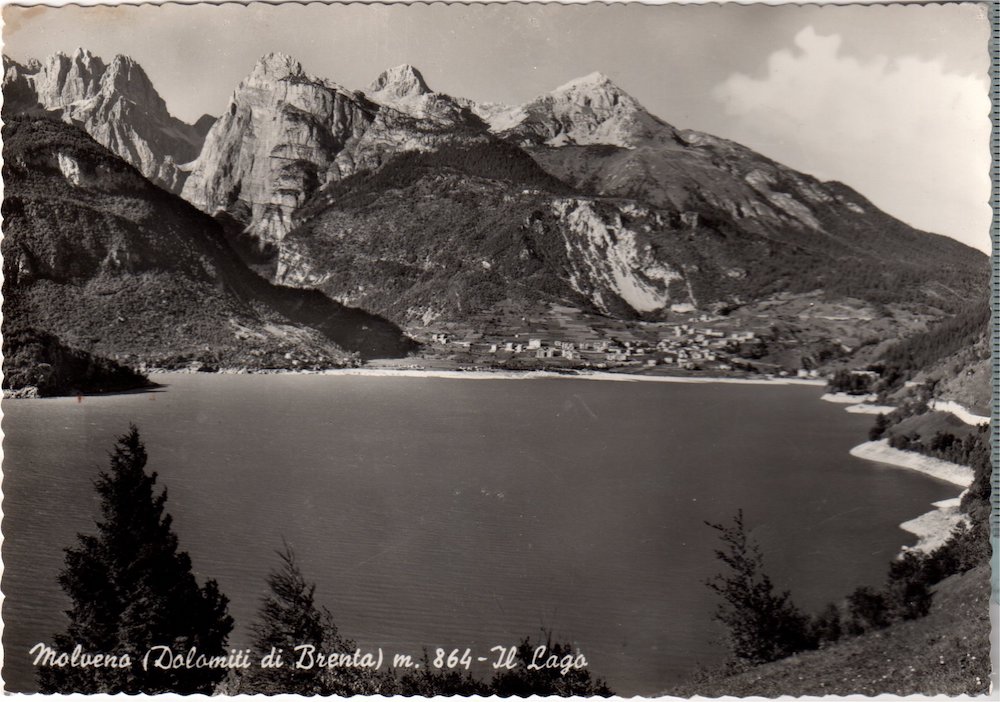 "THE LORDS ARE COMING!" MOLVENO AND THE 50'S

Until the 50s, Molveno maintained a mixed economy: most families lived on agriculture, breeding and timber cutting, but the exploitation of new tourist possibilities was starting to become more and more important. The hotels built from the 20/30s of the twentieth century first maintained the vegetable garden, the barn and the chicken coop, and with their own production they managed to satisfy part of the needs of the house that became a hotel, offering guests: vegetables, potatoes, eggs, cheese made with their own cows, meat and home-made cold cuts from Molveno. With the start of the Second World War, that tourism development process temporarily came to a halt. The country experienced a period of difficulty and several hotels were used as accommodation for the Italian German troops. Starting in 1950, there was a recovery thanks to the reconstruction started all over Europe. There were some families of Molveno who could offer some rooms to vacationers: they often left their homes during the summer to be able to rent them to foreigners. This model was followed by an increasing number of families, so that tourism became an important economic resource. There were a large number of small and very small family-run hotel businesses which replaced the old farm model. Between the 1950s and 1960s, in Molveno, the face of the locality radically changed: work on transforming the lake began. 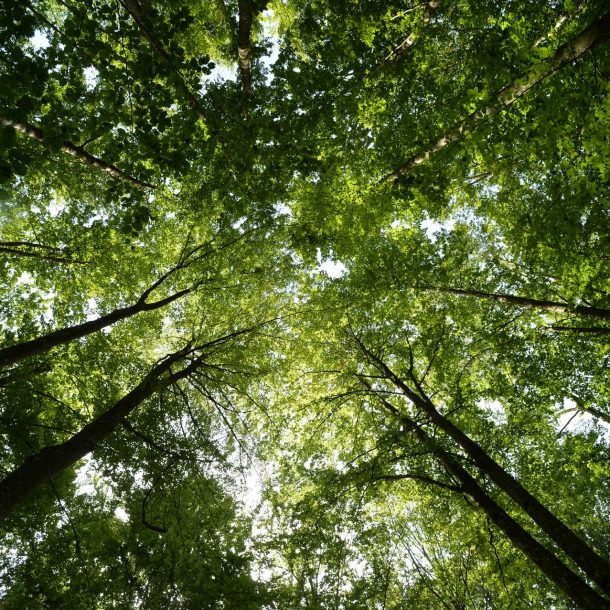 Cinema in the woods
Next Article

Saddle up: horse riding holidays in the Dolomites

If you want to experience the thrill of an horse ride surrounded by nature you can do it at the Andalo Riding Center.

Here you’ll find courses for beginners and experienced riders as well as horse rides of an hour or more in the surrounding woods. Call 0461 585900 to contact the stables

Activities & Sports on the Lake

Relaxation or fun? You find both on Lake Molveno.

In addition to the sun, grassy beaches and a magnificent view of the Dolomites, Lake Molveno offers many possibilities for relaxing and having fun.

Do you want to relax? Then lie down and snooze in the sun on the most beautiful beach in Trentino and, in the summer, take a refreshing dip from the pier between one sunbath and the other.

If it is the adventure you are looking for, you can rent a canoe, rowboat or pedal boat, electric pedal boats or sup directly on the lake. The rental center is open from June to mid-September from 8:00 to 19:00.

An incredible experience lived in complete safety. The moment before takeoff is unique and exciting and then 3, 2, 1 let’s fly! The paraglider inflates and rises and the view on the lake and the peaks of the Dolomites is incomparable.

Ready to fly? Contact the “I FLY TANDEM” team on 3391669777 to book or gift this unforgettable experience.

Activities for all tastes. Fun is guaranteed.

Instead, the most athletic will have the opportunity to run around the lake, to play tennis, to rent boats, pedal boats and canoes, to enroll in a diving course or to swim in an Olympic pool.

In short, fun is guaranteed for young and old, for athletes and not!

Upon your arrival, request the Trentino Guest Card which allows you to take advantage of discounts for castles, museums trains and buses

The perfect holiday for all the family.

Even the splendid lake at the foot of the Brenta Dolomites will be able to make families and sportsmen fall in love.

To welcome you will find the tune of 12 hectares of beach with English lawn and three children’s playgrounds: the “Playa park“, the swimming pool center with slides and water games, the Pump Track with skill area to learn how to mountain biking and mini golf.

The Alpotel Dolomiten “cuddles” its biker.

Ready to ride? If you love discovering the mountains on two wheels, the Dolomiti Paganella Bike Area will not leave you indifferent with its 400 km of bike trails for all levels. Whether you are looking for a hard and pure dirt path, a panoramic ride or a breathtaking downhill, here you certainly find your way on your wheels!

And if you come with your mountain bike, you can keep it dry and safe in our key deposit. What’s left to say?

Have a good ride

The Brenta Dolomites surrounding Molveno represent the ideal place to let everyone discover the pleasure of going to the mountains: with our three weekly outings we will make you understand and experience the best of alpine life and trekking.

We love walking in nature, we love being well, and above all we want to be in company! An unmissable opportunity to spend the day surrounded by nature in the woods of Molveno, Andalo and Paganella. We provide poles, backpacks, water bottles, crampons, front lights (flashlights), topographic maps, a well-stocked mountain library and all our personal experience to give advice and suggestions for free.